So recently the gang got together to play Ultracombat Normandy, as there are three of us we diced on a bigger game and as the terrain had been left up from a previous gangster game we thought it would make an ideal city battle. When we thought about we figure the most renowned was the defence of Arnhem so straight away Ray took the role of Lt. Col. Frost and the British Para. Michael and I each took a platoon of Germans. So the British forces had a platoon of Veteran Paratroopers and the Germans had two platoons of Average troops. The Germans also had two half-tracks. 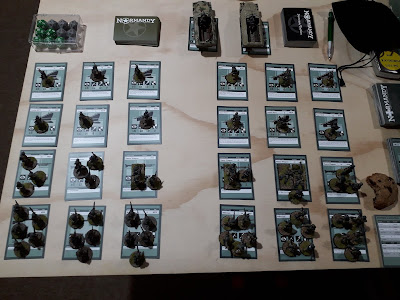 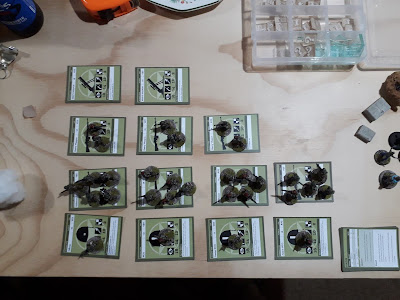 The British Paratrooper platoon above

The brief was simple, the British had to hold the board and the Germans needed to get them out as soon as possible. 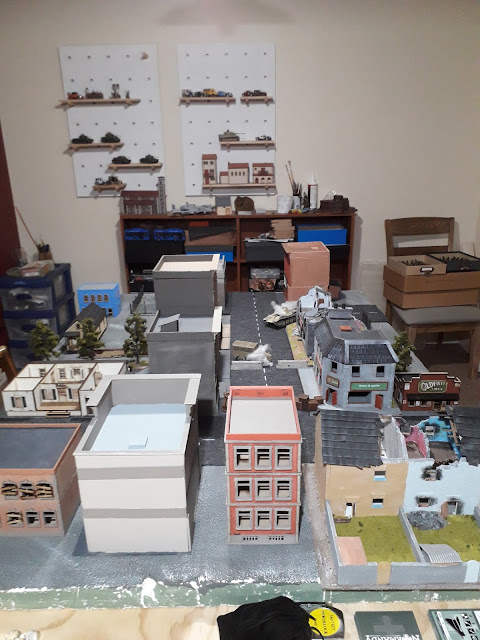 The British started the game hidden, the Germans entering the board from the far side
of the photograph. 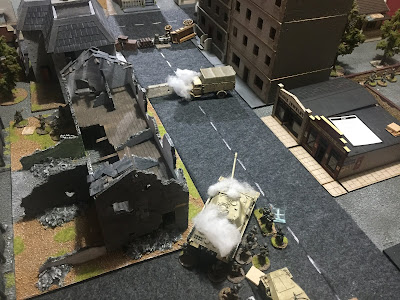 The Germans force started by infiltrating the board, probing for the hidden enemy. The British opened up with a Vickers HMG from the far edge of the board forcing the initial German forces going down the road to become hesitant.

With the main thoroughfare blocked the German forces headed down the right-hand side of the board again probing to find out where the British where. 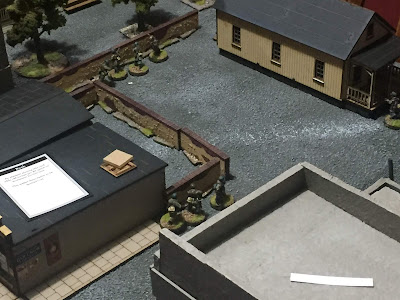 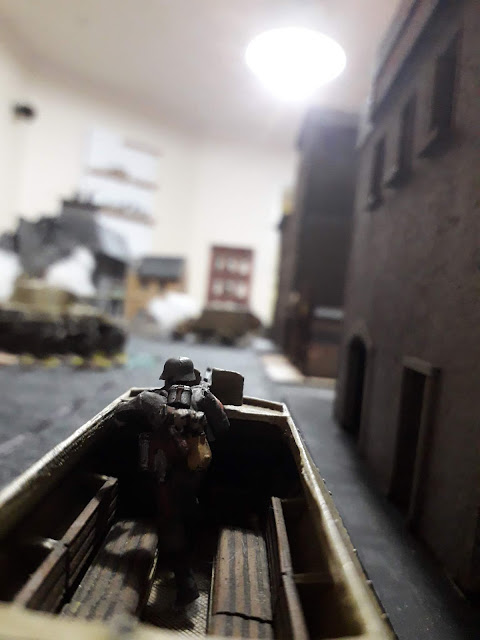 The gunner pours fire on the British HMG suppressing it. 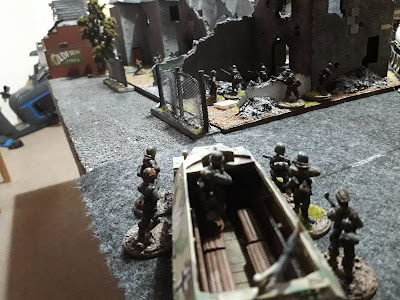 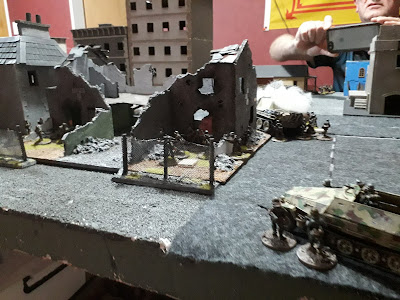 The German squad debusses from the half-track and begins to enter the ruins, with the Halftrack proving covering fire on the British force that was moving from building to another. 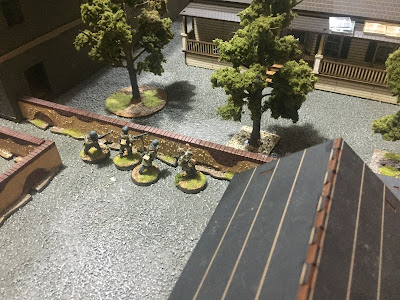 On the right-hand side, the German forces come under withering fire from a British Bren gun team hidden in the pavilion like building at the top of the image. The problem the Germans had was they were still bringing forces on to the board so had to wait for reinforcements. However, they were not without decent firepower and the righthand squad MG42 did manage to keep the Bren head down.

For both sides, the terrain was proving difficult. The Germans had to find the British but the British had to move to bring their guns to bear. 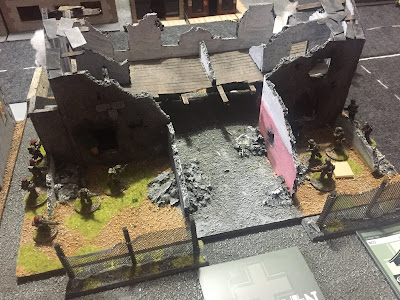 The battle for this house raged for most of the game with the Germans eventually winning by weight of numbers but not before a plucky British NCO made a mess of one squad with a very well placed grenade. 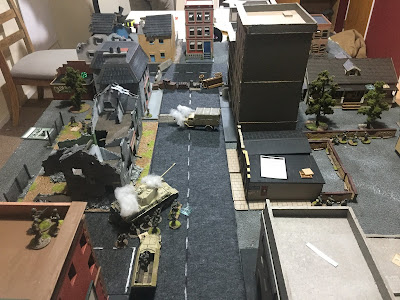 The Germans massed behind the knocked out Panther and with the aid of the very skittish Half-track pushed forward quickly down the road. 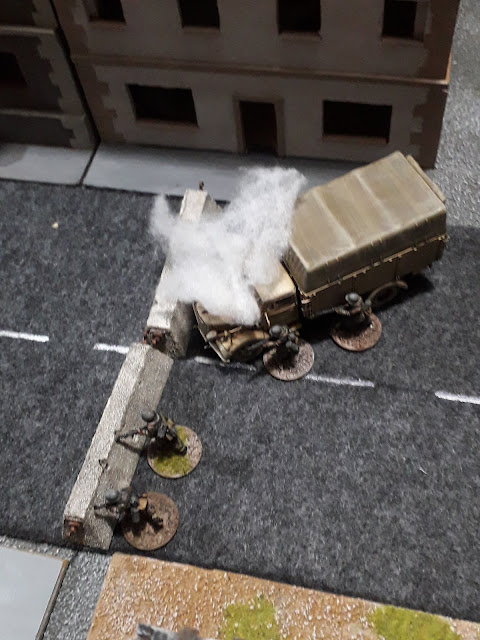 Here the British ambush came into its own. For about an hour we had been fighting down the main street and the only British shooting at us had been at the end of the board, with finally enough troops we head down the road at breakneck speed (3AP=18") to the barricade. But Lt. Col. Frost (Ray) had other ideas first he attacked us from building on the left and just as we had neutralised that by our MG42 in the rear, he hit us from the third floor on the right. It was very bloody. 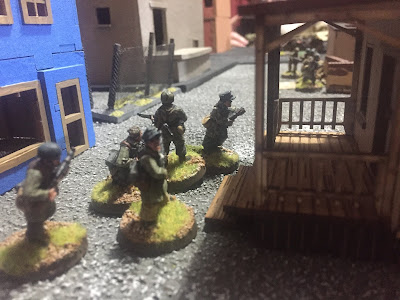 Meanwhile, on the right-hand side of the board, the Germans amassed forces for a big push on the pavilion. With much firing and eventually knocking out the Bren team, the German forces rushed the pavilion. The British responded by bringing in reinforcements from across the road. This, in my opinion, was where Frost (Ray) made his big mistake. He should have given the pavilion away and stayed in cover in the buildings across the street. 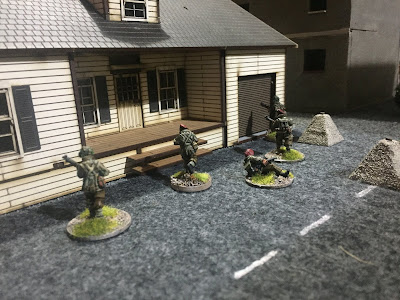 The German Building assault carried the day with the final Brits being finished as they attempted to retreat back across the road. 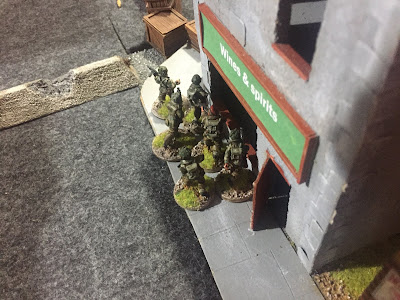 With the British forces now giving ground both left and right sides of the board, Frost masses his men to attack the encroaching German forces. But it was not to be the Germans having knocked out the Vickers the British lack of numbers began to tell as the larger German forces brought its guns to bear.

Well, we always knew that the German would win but it was how long could the Brits hold out and boy did they hold out. The British plan went swimmingly with the German casualties in the first part of the game being frightening but eventually, the weight of number tell and once enough German units were on the board the MG42s went to work suppressing elements who would later be routed out by Rifleman. This was an exciting game and a much larger game than any of us were used too and took just over 3 hours to play.

Lessons were learnt from both sides about the terrain. While it was a technical victory for the Germans, the victory was that the British delaying tactics worked buying precious time for Frost and his forces on the bridge. It was a great game and I would highly recommend playing these larger games with your friends once you have mastered the basics of the game.
Posted by Skirmish Sangin at 13:44