Helmand, in the south-west of Afghanistan and roughly 500 hazardous kilometres from the capital, Kabul, shares a southern border with the unruly tribal region of north-west Pakistan. The province consists largely of furnace-like flatlands, bisected by the Helmand River, which is flanked either side by lush vegetation known as the ‘Green Zone’. The Green Zone is an area of densely irrigated land, supporting almost 90 per cent of the local population. Depending on the season, crops of poppy, marijuana and maize reduce visibility to 10 metres and sometimes less. The fertility of the Green Zone makes Helmand Afghanistan’s largest producer of opium.

To clear the Taliban out of the their strongholds in the green zone to the north of Gereshk.

The game began with ISAF pushing into the green zone, on the right flank the French made quick headway, on the left flank the British went to ground and began to pour in covering fire at the Taliban occupied compounds. 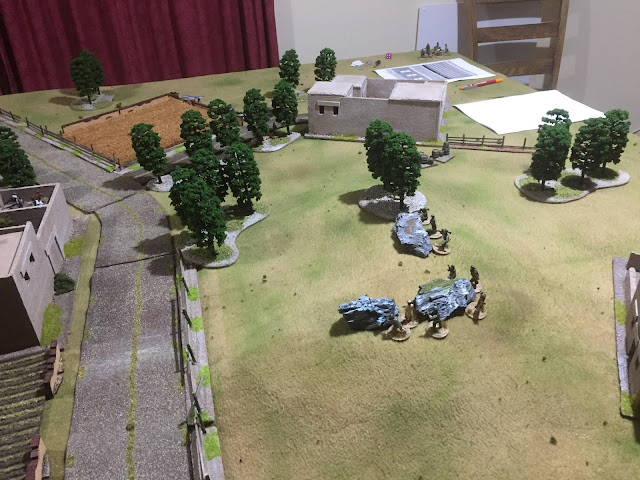 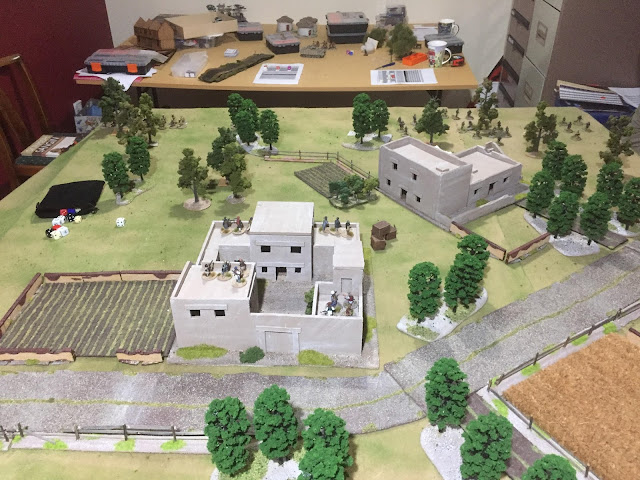 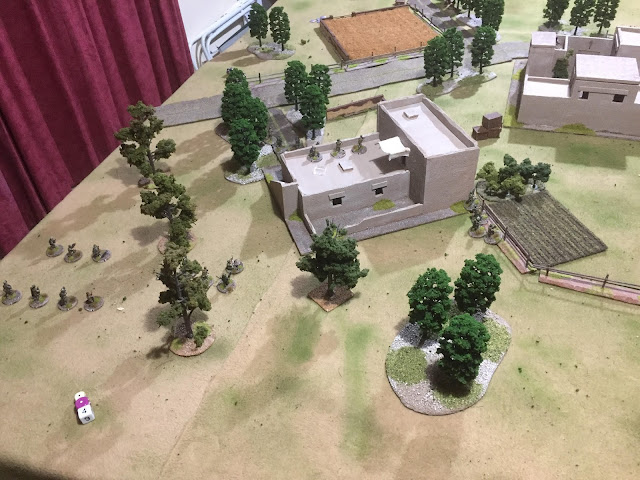 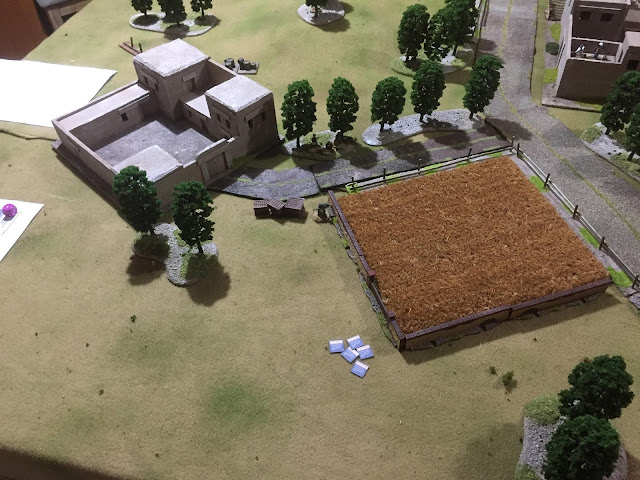 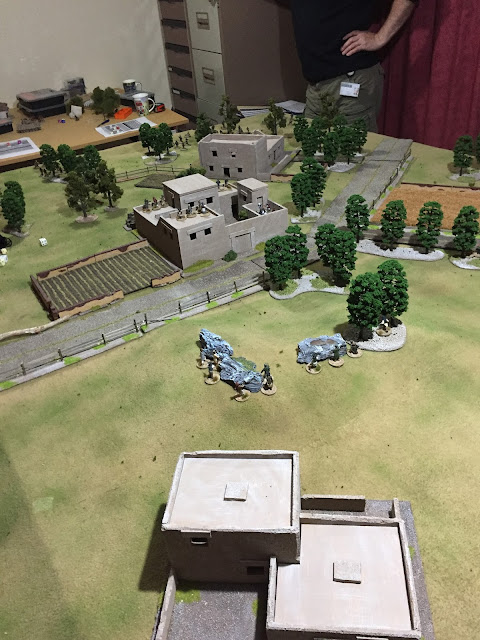 Below: The British dug in and providing covering fire for the French advance. 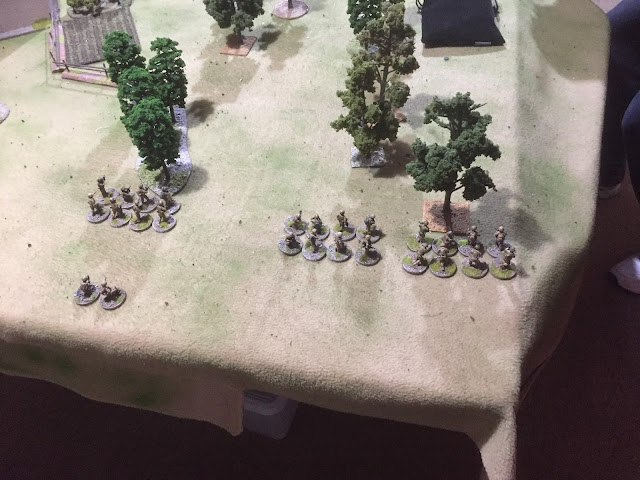 Below: The French begin to advance on the nearest compound. 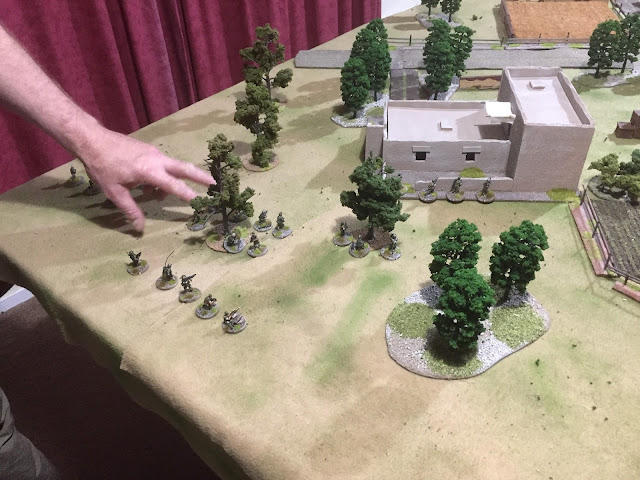 Below: Wide version shot of the opening moves. 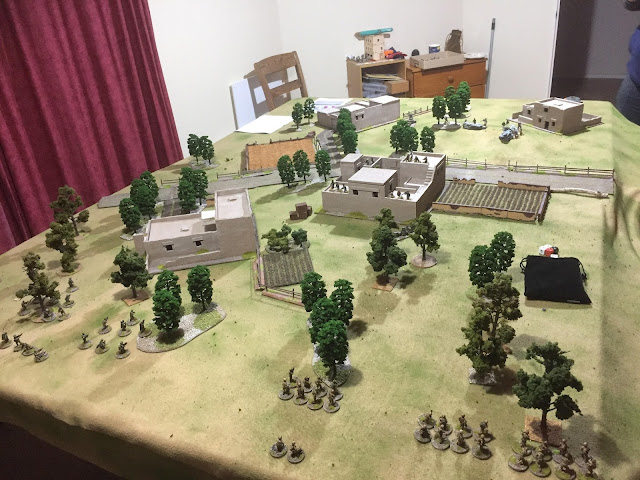 Below: Taliban begin to pour fire into the advancing French (as the Taliban player - this is where I began to roll really badly and only having a few APs as I had rolled low on the command dice, I made the best use of cover to keep ISAF at arms length) 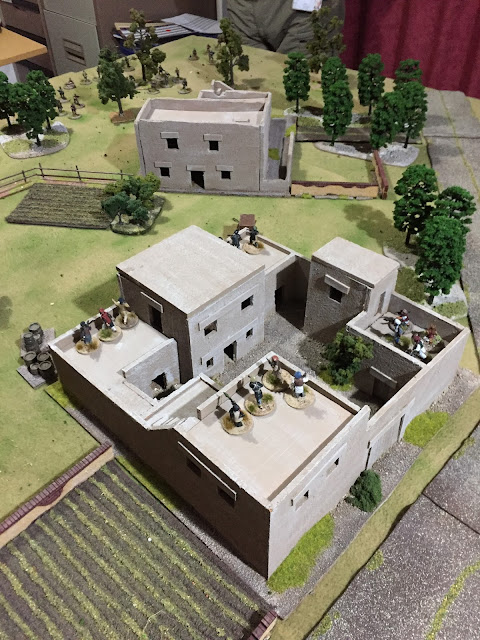 Below: The British had rolled high on their command dice and by going to ground and not move could now pour fire into the Taliban compounds. However the Taliban fired back with many RPGs and PKMs but to little effect. 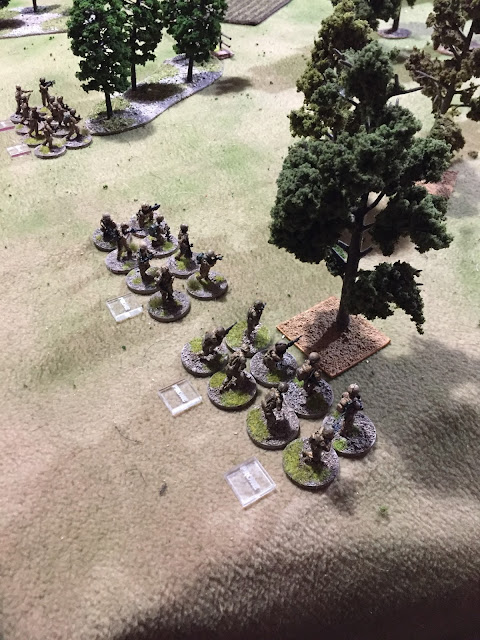 Below: The French commander Raymond d'Tawa surveying the battlefield prior to the engagement 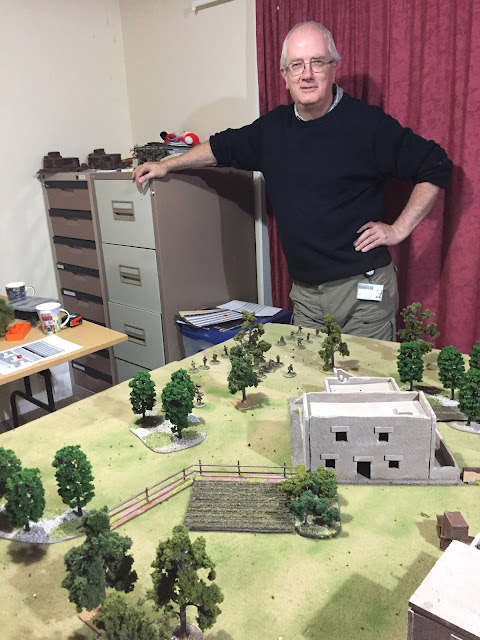 Below: The British LMG's and UGL's plus the French LMG's and AT4's begin to hurt the Taliban 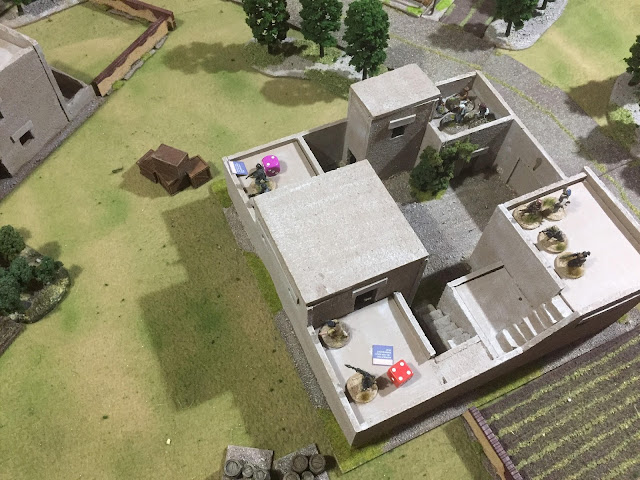 Below: The Taliban move up reinforcements but too little effect. 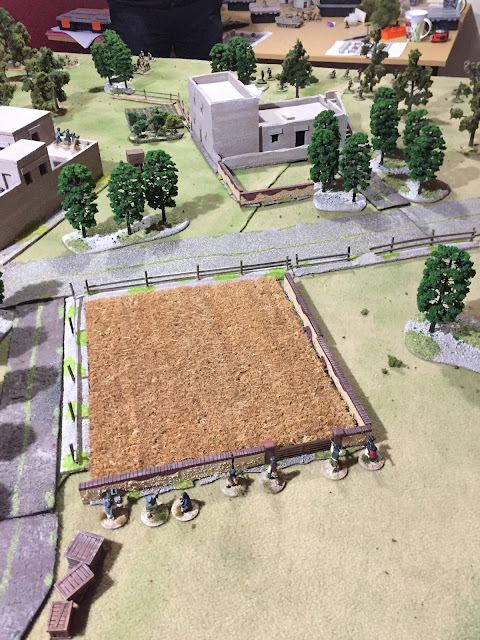 Below:  The French finally occupy the first compound after some bitter fighting. 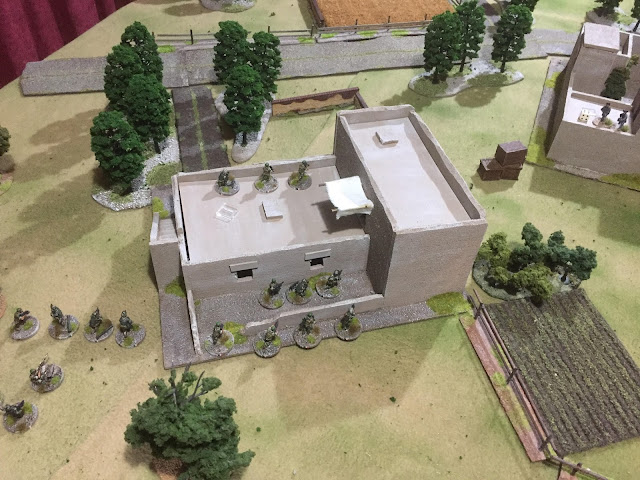 Below: The Taliban on the hill get into a duelling match with the dug in British who didn't have it all their own way. But clever tactics by the British nullified a lot of the Taliban fire.

Below: The Taliban Command calls for a general withdraw. 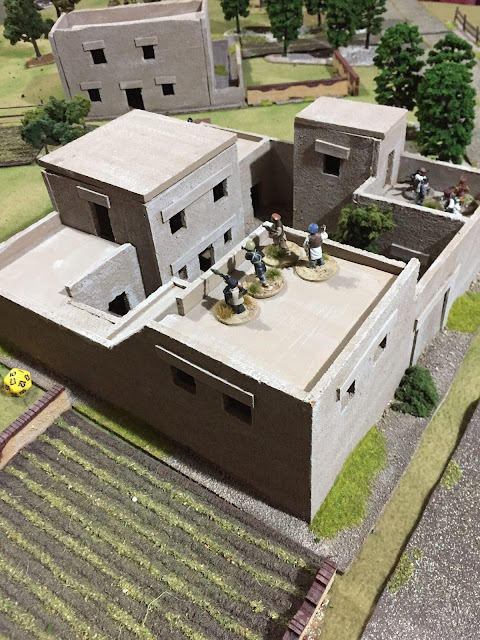 So ISAF carried the day, the Taliban had been too static for two long and once the British and French had spotted them the combined arms made short work of the opposition. Although a beleaguered Taliban did hold out for way longer than expected given how few command APs they had. 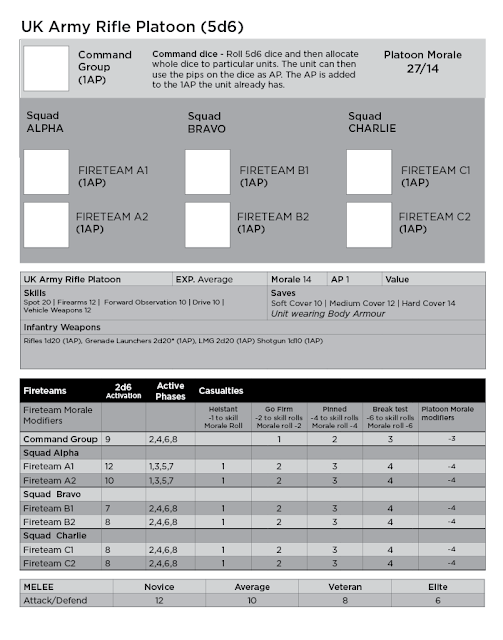 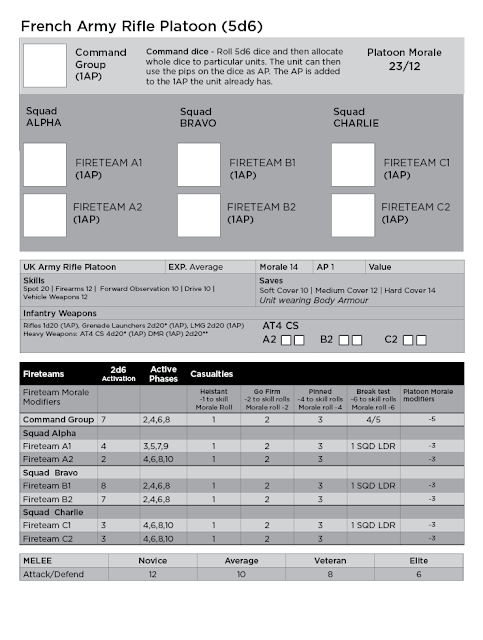 Well every time we play this game we learn just a little more. This time the command points were definitely an issue and we have already sorted a fix out for that. The fire teams worked well and the ability to go to ground for troops worked really well. The British  and French players using real tactics made the Taliban pay big time. The system handles the number of troops easily and its exciting seeing the game scaling up in size.

At the play test in Cold Wars (USA), that were using an earlier version of these rules we got these really great comments:

"I had the good fortune of playing a test version of the rules at the Cold Wars Con on Lancaster, PA, USA last weekend, and had a blast.  A platoon of British regulars sweeping through an Afghan village ran into 4 squads + HMG of Taliban.  We played in 20mm and the rules were streamlined - no armor or air, no off-board assets - and it was great fun.  To my mind, it struck the right balance between simulation and playability.  Really looking forward to the full-blown rules set."